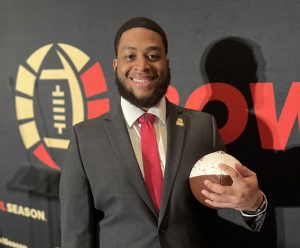 I was privileged to work remotely as a sponsorship and marketing intern for Bowl Season during the Spring 2022 semester. Bowl Season is the overarching brand of college football’s postseason, including 44 bowl games and the College Football Playoff.

I worked closely with the Director of Sponsorships, John Egan, with a goal of prospecting, selling and activating Bowl Season’s sponsorships. A lot of my time was spent in client-facing work, where I researched and contacted prospective companies in an effort to bring in sponsorship revenue. I also created sales decks, attended sales calls, wrote contracts, and brought client activations to life.

The highlight of my Capstone was planning and attending Bowl Season’s Annual Meeting, which drew more than 200 people and featured a 54-booth tradeshow. I played a vital role in the coordination of the tradeshow with sponsors, and the execution of various on-site activations.

I learned a lot during my Capstone, such as the value of time management and the importance of being organized. My biggest lesson was in professionalism. Within my first two months at Bowl Season, I was meeting with and emailing upper-level management executives. I had to learn how to conduct myself in that environment as I strive to be on that level one day in my career.

I’m proud to say that my hard work at Bowl Season and Syracuse University helped me land a full-time position as a Partnership Marketing Coordinator at WWE (World Wrestling Entertainment).