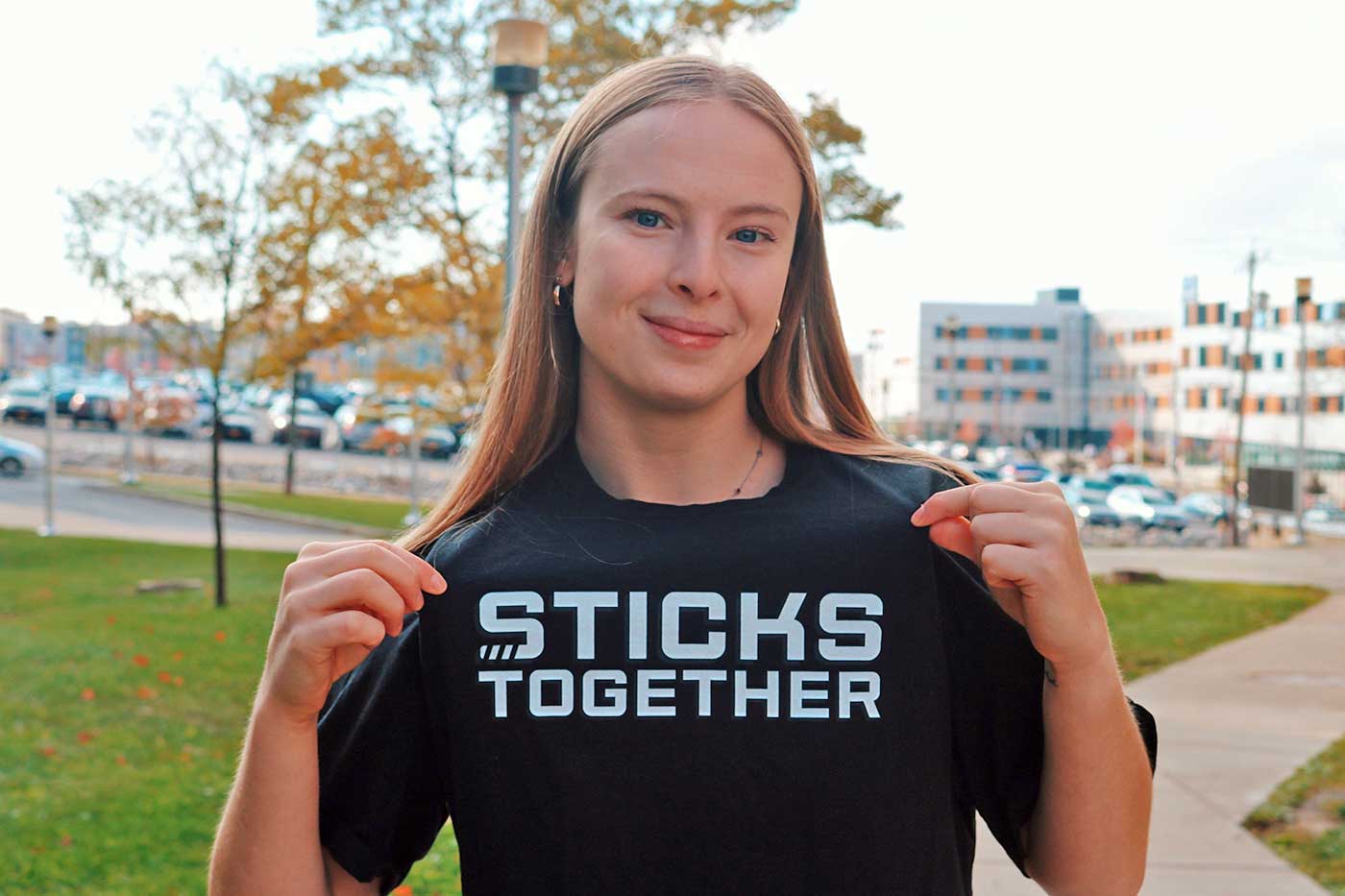 On Comfrey Crescent in Orléans, a suburb of Ottawa, there was one thing that always brought the children out of their yards and houses and onto the street.

No, not the ice cream truck. Instead, Sarah Thompson had come out to play.

By the time she was 12, Thompson had turned into a fantastic hockey player. She would strategically place her hockey net in the street to avoid hitting cars and rifle shot after shot off her shooting pad in the net.

“All the little kids would come out because Sarah’s outside and they wanted to play with her,” says Annette Thompson, Sarah’s mother. “They would sit on the grass watching her take her shots. She was a real role model for the little ones.”

Starting May 16, Thompson will be surrounded by a new group of children who are eager for role models. Thompson ‘24, a sport management major in Falk College and a forward on the Syracuse University women’s ice hockey team, will be in Buenos Aires, Argentina, teaching children from a low-income neighborhood how to play street hockey. Thompson’s “Sticks Together” project is part of a sport development humanitarian program organized by International Volunteer HQ.

Thompson will be joined in Argentina by Tracey Edson ’24, a sport management major who will also teach sports and chronicle the trip by filming Thompson tutoring the children. The program will run for three weeks, and Thompson and Edson arranged to have nets, hockey sticks, plastic pucks and T-shirts shipped to Argentina for the children.

Thompson learned about the impact an adult can have on a child from her mother, who has been a teacher at Our Lady of Wisdom elementary school in Ottawa for 25 years. She also remembers attending sports camps as a child, and how she looked up to the young adults who were teaching her.

Now, it’s her time to be the teacher.

“I think of all the opportunities that I had to play so many different sports, and there’s kids in these underprivileged communities that all they have is a soccer ball and that’s all they get to play,” Thompson says. “What if you stink at soccer? I know I stink at soccer, that’s not my favorite sport to play.

“I was lucky enough to play everything, and I think that’s what’s special about teaching another sport,” she continues. “I’ve always loved the idea of teaching kids sports and what better way than going to a place where they often don’t get to have those experiences where someone can teach them something new.”

When she was 6, Thompson was one of those kids in the grass watching the bigger kids play. She had started playing ice hockey, collecting hockey cards, and watching NHL games, and she was captivated by the street hockey being played by the older boys in the neighborhood.

“I started playing on my own, just to see if I could keep up with them, and eventually I would just sit on the sidelines and poke my head in and see if they’d let me play,” Thompson says. “And it eventually became, yeah, you can go in next if you want and I was like, ‘Sure!’ They’d strap me in there (in goal) and that’s how I started to get invited.”

The boys, as Thompson says, were “nice about it”–they shot tennis balls when Thompson was playing goalie instead of the traditional hard rubber street hockey balls. But soon enough, the boys needed help keeping up with Thompson, who played for premier youth teams in Ottawa and Ontario, and for Canada’s under-18 team in the Canada-U.S. Summer Series and the 2019-20 World Championships.

Through it all, the neighborhood remained the center of Thompson’s hockey universe. When Sarah, her younger sister Kate and Annette Thompson would get home from their schools at 3:30, the nets would come out, the fruit would be sliced up for snacks, and it was game on.

“By then the kids were coming from three streets down,” Annette Thompson says. “We moved homes (in Orléans) when Sarah was 12 and Kate was 8, but when we brought out the nets the kids would still come ripping around to play.”

Thompson entered Syracuse University in the Fall of 2019 and played in 19 games for the Orange as a freshman. This past season, Thompson played in all 32 games for a Syracuse team that finished with a 15-11-6 overall record, won the College Hockey America regular season and tournament titles for the first time in program history, and secured the team’s second appearance in the Division I NCAA Tournament, where the Orange reached the regional semifinal.

After helping establish Syracuse as a hockey school, Thompson has now set her sights on turning a neighborhood in Argentina into a street hockey hotbed.

Thompson wanted to make a humanitarian trip last summer, but it was put on hold by the COVID-19 pandemic. Thompson says the delay was “a blessing in disguise” because it gave her another year to prepare for her “Sticks Together” project. Thompson collected donated new and used equipment, created a website, and started a GoFundMe page to pay for travel expenses, shipping the equipment, and the International Volunteer HQ program fees that cover housing and two meals per day.

“It just kind of spiraled. I told my mom and she said, ‘It’s crazy, it’s a lot, but I love it’ and she said I have no doubt that you’ll figure it out,” Thompson says. “I had so many people I had to connect with to help me put it together.”

One of those people is Edson, who worked with the hockey team as an intern with the Syracuse University Athletic Communications Department. As an intern, Edson was learning under one of the best sports communications experts in the business, her mother, Executive Senior Associate Athletics Director/Communications Sue Cornelius Edson.

Tracey Edson had heard through a friend that Thompson was planning a trip to Argentina to teach street hockey.

“I thought that’s a great story to promote that the athletes are doing these meaningful things outside of their sport and outside of school,” Edson says. “We had a meeting in the fall about her trip and by the end of it, I asked if there was someone down there who’s taking pictures or video that they can send to us. I’m thinking about the media side of it.”

When Edson asked that question, Thompson asked her, “What about you?”

“She invited me and I was honored,” Edson says. “It’s going to be a trip of a lifetime and to be able to do it with one of your really close friends, that’s something that a lot of people can’t say that they did.”

Edson, who played basketball and golf growing up, will also work with the children when she isn’t filming.

“We both have found a passion for sports and a passion for teaching so to be able to share that with those kids and be a role model for them will be special as maybe it’s something they continue with in their lives,” Edson says. “Sport brings a lot of great things and I want those kids to experience that.”

Thompson has worked extensively with International Volunteer HQ on the logistics of the after-school program, which will involve children from Recoleta, a neighborhood in the northern part of Buenos Aires near the Rio de la Plata (River Plate). Thompson and Edson will spend two weeks instructing about 15 children and some teachers who can then instruct the children after Thompson and Edson leave.

Thompson and Edson will have interpreters provided by International Volunteer HQ to help bridge the language barrier with the Spanish-speaking children. All the equipment they transport to Argentina will stay with the school.

“I’m curious to see if they’re going to have any idea what (hockey) looks like,” Thompson says. “It’ll be cool if we can bring a computer and show them me playing (at Syracuse) and the NHL and that this is ice hockey.

“We have no idea what we’re walking into, and the exciting part is that as much as we’ve been planning this project forever, you’re not going to really know until you’re there,” Thompson adds.

Even so, that hasn’t stopped Thompson and Edson from contemplating a similar trip to South Africa next year. And Annette Thompson, Sarah’s mother, won’t be surprised if her daughter turns these trips into a lifelong journey.

“She wants to have an impact with kids, and this could be a door opening to her where she can work with a nonprofit organization that brings sports to children,” Annette Thompson says. “She has spent a lot of time with organized sports, but this trip will remind her of her fondest memories of playing pickup hockey with her friends.”

Visit Thompson’s website to learn more about her Sticks Together project. To donate for this year’s trip to Argentina or next year’s humanitarian trip, visit the Sticks Together GoFundMe page.