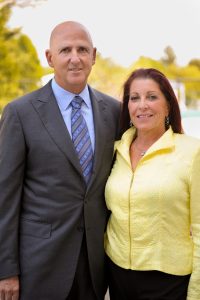 With a $15 million gift from the Falk family and an emphasis on pairing social responsibility and service with experiential learning, the College of Human Ecology becomes the David B. Falk College of Sport and Human Dynamics.

SU Trustee David B. Falk ’72 and Rhonda S. Falk ’74 gratefully recall how their parents worked long hours and sacrificed because they believed it was essential for their children to receive a college education. David’s mother, Pearl W. Falk, was a tireless public school educator who held two master’s degrees and spoke six languages. During World War II, she was an interpreter for Nelson Rockefeller, who was handling Latin American matters for the U.S. Office of Inter-American Affairs. Rhonda’s father, Leon Frank, owned an oil heating company that took him away from home frequently and required her mom, Florence, to care for the family. “My father had a heart attack at 38,” Rhonda Falk says. “Yet, he continued to work hard and provide for our family with all that was needed and much of what was wanted, including a college education for my sister and me.”

The Falks credit their parents’ strong work ethics and the priority they placed on education for their own achievements. Rhonda Falk spent the majority of her career in operations and international software sales management. David Falk, long recognized as one of the sports industry’s leading figures, is the CEO of Falk Associates Management Enterprises (FAME) and has represented many of the NBA’s all-time greats, including Michael Jordan and Patrick Ewing. During the past 30 years, Falks’ visionary innovations—and record-breaking contract negotiations—helped shape the evolution of the professional sports business.

A desire to honor their families has motivated David and Rhonda Falks’ purposeful and generous commitment to SU since graduating in the 1970s from the College of arts and Sciences. In March, the University announced the Falks’ pledge of $15 million to the College of Human Ecology—one of the largest-ever gifts to SU. In their honor, the College of Human Ecology was renamed the David B. Falk College of Sport and Human Dynamics in July (2011). “This gift reflects not only David and Rhonda’s generosity as philanthropists, but their thoughtfulness and vision as deeply engaged donors,” Chancellor Nancy Cantor says. “They are keenly attuned to the rapid evolution and increasing intersections of the academic fields in the college. We’re enormously grateful for this signature gift, which embraces Scholarship in Action by catalyzing cross-disciplinary collaboration.”

The Falks’ special connection to SU spans four decades and two generations. They have two daughters: Jocelyn, a 2010 graduate of the S.I. Newhouse School of Public Communications; and Daina, a Duke University graduate. In the late 1990s, the Falks created the Pearl W. Falk Endowed Chancellor’s Scholarship. In 2008, they established the David B. Falk Center for Sport Management, which draws on the leadership and expertise of faculty from several schools and colleges on campus. The following year, they endowed a faculty position, the David B. Falk Professor of Sport Management, recruiting a nationally recognized expert, Professor Rick Burton ’79, to enhance the program’s research, academic, and experiential learning components. In fall 2012, the Falk Center is scheduled to debut a model interdisciplinary master’s degree program in sport venue and event management.

“David and Rhonda have watched closely as our college has evolved, and they believe in and embrace our ultimate mission of social responsibility and social change through professional practice,” says Diane Lyden Murphy ’67, G’76, G’78, G’83, dean of the newly named Falk College. “We are tremendously grateful for their extraordinary transformative gift, which is the most funding Syracuse University has ever received for academic programs within human services.”

The Falks’ gift will allow the college—portions of which are housed in eight different campus buildings—to relocate to a new, central location to be created at MacNaughton and White halls, currently home to the College of Law. The move will occur once the College of Law relocates to Dineen Hall, a new building for which planning is under way.

After initially providing founding support for the department of Sport Management, the Falks expanded their commitment to the entire academic curriculum because of the college’s deep roots in social responsibility and community service and its strong emphasis on experiential learning. The college’s academic portfolio includes programs in exercise science, food studies, human development and family science, marriage and family therapy, nutrition, public health, social work, and sport management. “Global concerns for critical societal issues like childhood obesity, substance abuse, elder care, and malnutrition are at an all-time high,” David Falk says. “We need dedicated professionals who are committed and willing to give of their time and of themselves. The Falk College’s unique combination that pairs social responsibility and service with experiential learning means students will be well trained to address society’s most pressing issues, finding themselves both where the jobs are—and where they are most needed.”

The Falks’ belief in social responsibility is evident in their personal lives. Rhonda is involved in the Susan G. Komen foundation for the cure of breast cancer. David has served as chairman of the annual Sports-a-Thon to benefit the Leukemia & Lymphoma Society of America, raising more than $2 million in the past decade, and he currently sits on the board of directors of the Congressional Award Foundation, which honors young Americans for volunteer public service and other achievements.

The significant presence of experiential learning in all of the college’s academic programs—locally, nationally, or globally—is particularly exciting to the Falks. For decades, the college has maintained professional field placements in social work and marriage and family therapy in Central New York communities. This year, the college-sponsored numerous study abroad programs, including public health studies in Amsterdam that focused on global perspectives of alcohol and other drug policies; a comparative review of social work services across France, Germany, and Switzerland; and, exploration of the history of the ancient and modern Olympic Games spanning Athens, London, Paris, and Lausanne. The college also launched two new spring break programs: one that developed from an ongoing collaborative relationship with the University of the West Indies in Trinidad, allowing students in human development and family science to observe and participate in education and social service settings there; the other was a sport management immersion program in Los Angeles that introduced students to representatives from such organizations as ESPN, the Los Angeles Lakers, and the L.A. Coliseum.

“There was very little emphasis on experiential opportunities when I was a student, particularly for a psychology major with an interest in French,” Rhonda Falk says. “Most of our learning took place in the classroom, although there were some credit-based internship courses. I am a very strong proponent of taking classroom learning and applying it before you graduate to gain experience.” David Falk notes the important role alumni can play by offering internships, networking, and job opportunities to students. He cites the college’s Sport Management Advisory Council—which he chairs – as a valuable tool in facilitating the link between classroom learning and experience-rich opportunities that will set SU graduates apart from the competition.

The Falk College is also the academic home of the Kleinhandler Student-Athlete Life Skills Program, a collaborative, interdisciplinary course designed for student-athletes that focuses on personal and social responsibility. A top priority of the Falks, the course aims to assist student-athletes in managing the challenges of college and athletic life, as well as life after college, focusing on addictive behaviors, fiscal responsibility, strategies for enhancing athletic and academic performances, and personal and social issues related to race, diversity, and sexuality. David Falk believes the college is in an excellent position to expand this program and make it a national model for the NCAA, the governing body for many university and college athletic programs. He also sees an opportunity for Falk College students to get involved in tutoring, advising, and mentoring student athletes. “For 20 years, I have been asking college coaches what happens to the 98 percent of students who dream of playing professional sports, but have no realistic opportunity to do so,” he says. “This course motivates them and provokes action on preparing for life after college sports whether or not they turn professional.”

Falk likens his work as an agent to that of a teacher. “I help young people establish themselves financially,” he says. “Equally as important, we spend time focusing on their responsibilities of being role models and giving back to the communities where they live. I take pride knowing I’m teaching young athletes to be good businessmen and good citizens.” He regularly visits campus to talk with students and share his experiences. “I love the interaction,” he says. “Hearing what students think is also important because it helps me re-evaluate my ideas.” During one visit, Falk told students a story about his colleague and friend, John Thompson, the legendary former Georgetown basketball coach. In 1984, Thompson called Falk, wanting to know what he thought about the possibility of All-America center Patrick Ewing leaving school a year early to enter the NBA Draft. “It’s a terrible idea,” Falk told Thompson. Ewing completed his senior year and, with Falk as his representative, was the top pick in the 1985 NBA draft, selected by the New York Knicks. among his accomplishments, Falk negotiated the highest contract at the time in NBA history for Ewing. “Though I had never met Ewing when Coach Thompson called me in 1984, I read an article in The Washington Post where Patrick promised his mother, an immigrant from Jamaica, that he would finish school,” Falk says. “His mother passed away during his junior year. She wanted him to finish school and that meant something.”

Falk recalls a conversation he had with his own mother, sometime around his junior year in college. He expressed his gratitude for all she had done and told her he would build a monument in her name one day. “While our gift that has renamed the college is not exactly a statue in my mother’s name, it is a way Rhonda and I will honor our parents’ memories and keep learning alive,” he says. “Plus, it is our way of saying thank you to our families and to Syracuse University.”