A professor of human development and family science discusses the importance of socialization, particularly among ethnic-racial minority families. 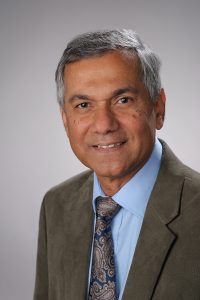 How parents talk to their kids about racial inequality and trauma has taken on a sense of urgency, states Jaipaul L. Roopnarine, a researcher in Syracuse University’s Falk College.

“Ethnic-racial socialization is positively linked to better academic outcomes and better behavioral adjustment in children as well as a stronger sense of racial identity in adolescents,” says Roopnarine, the Pearl S. Falk Professor of Human Development and Family Science. “It imbues children with a sense of self-confidence and teaches them about bias.”

Since 2015, he and Kimberly Davidson G’16, a former doctoral student who is now an assistant professor at Central Michigan University, have followed preschoolers in New York’s Head Start Program to understand how they learn about race and ethnicity from their parents, teachers and caregivers—a process known as ethnic-racial socialization. Their work is funded by the U.S. Department of Health and Human Services.

“These discussions need to occur in all ethnic groups and go beyond egalitarian messages,” says Roopnarine, who also holds professorial appointments at Anton de Kom University of Suriname in South America and the University of the West Indies. “Such messages should be brief for young children and avoid taking a colorblind approach. We shouldn’t overwhelm them with graphic images of events.”

We recently caught up with Roopnarine to find out how socialization works, particularly among ethnic-racial minority families.

What’s the difference between ethnic and racial socialization?

Research on racial socialization emerged to understand how African American parents enable their children to maintain high self-esteem while preparing them to understand the structural inequalities and barriers that may hinder their development.

Ethnic socialization grew out of work on immigrant families—Latino, Asian, Caribbean and others—that focused on parents’ concerns about their children’s cultural identity, retention of cultural practices, and group orientation or assimilation.

Our work recognizes that positive messages can help children combat racial and ethnic stereotypes, in addition to bias.

You’re a proponent of intentional parenting for equity and justice, involving frank discussions between parents and children. Why are such parenting approaches gaining traction among ethnic-racial minority families?

Conversations about equity and justice should be in lockstep with children’s developmental levels and their willingness to engage in such topics.

My research with Kimberly Davidson considers how parents and teachers of children from ethnic-racial minority families address issues such as bias, egalitarianism and cultural socialization.

Bias is prejudice for or against a certain race or ethnic group. Egalitarianism is the belief that all people are equal, regardless of race or ethnic background. Cultural socialization refers to how parents teach their children about the histories, traditions and values of their own racial or ethnic group.

These things affect a child’s ability to self-regulate (i.e., to practice self-control) during a difficult situation.

What have you and Professor Davidson learned?

Parents and preschool teachers talk to children the most about equality and the least about bias. Both equality and bias are important parts of socialization, especially during adolescence.

We also have found that 73% of parents keep culturally appropriate toys in the home—toys that are multicultural or represent their child’s ethnic or cultural background.

Roughly the same percentage of parents has at least three children’s books in the home that reflect their child’s ethnic-racial heritage and pictures on display depicting family members or other people from the child’s own ethnic-racial group.

What disparities have you uncovered?

Are teachers and parents usually on the same page?

Not always. There is a degree of mismatch between home and school environments.

What else do you study?

I am interested in risk and protective factors in parent-child relationships as well as childhood outcomes, particularly among African Americans, Hispanic Americans and European Americans.

One project, also supported by Health and Human Services, found that children of low-income families from urban and rural sites across the United States are more likely to have better social skills if their fathers engage with them as infants and toddlers. Likewise, I’ve found that, in Africa and the Caribbean, low levels of father engagement have strong implications for cognitive and social development during a child’s preschool years.

Positive parenting may not produce the same child development outcomes in high-income countries, independent of access to early childhood education. The two need to be offered in tandem to enhance a child’s early social and cognitive development.

This is an SU Story by Rob Enslin originally published on November 10, 2020.